Another December, another Top Tours triumph for Trans-Siberian Orchestra. After leading the December 2019 list, the perennial holiday-rock outfit returns to No. 1 with a monthly haul of $42 million and 588,000 tickets across 71 shows according to figures reported to Billboard Boxscore.

How could one act play 71 shows in a 31-day period? TSO employs an East Coast band and a West Coast band, sometimes playing multiple shows each day. A matinee and primetime show on either coast combined for $2.5 to $3 million per day as the month headed toward Christmas.

Throughout December, the overall $42 million haul splits to a nearly identical $21.07 million from the West Coast ensemble and $20.95 million from the East. Similarly, attendance was more or less the same, with 296,000 tickets sold in the West, and 293,000 in the East.

These geographical borders aren’t so rigid. While the West ensemble mostly stuck to California, Texas and parts of the Midwest, it also dipped into Florida, scoring the entire tour’s biggest day at Tampa’s Amalie Arena. Two shows on Dec. 19 brought in $1.8 million and 24,700 tickets, just as the Omicron variant began to surge in the U.S.

Trans-Siberian Orchestra has toured annually since 1999, but missed the 2020 holiday season because of the global pandemic. And while venues re-opened throughout 2021, artists and ticket buyers alike continued to face a spectrum of health risks and government restrictions as multiple variants morphed and spread.

The general confusion and stop-and-go nature of the last six months left the 2021 tour with 98 shows and an average of 7,800 tickets per night, running slightly below 2019’s 109 shows and 9,300-per-show pace. Still, the brand-name recognition and TSO’s national routing has them on top for December, nearly doubling their next closest competitor.

Speaking of November holdovers, BTS reigns over the Top Boxscores chart for the second consecutive month with the final two of four shows from their run at SoFi Stadium in Inglewood, Calif., on Dec. 1-2. The first two, on Nov. 27-28, earned $16.5 million and sold 106,000 tickets. The similarly chart-topping December shows ticked up ever so slightly, with $16.8 million and 107,000 tickets. Altogether, it was the highest grossing Boxscore in almost a decade, bringing in $33.3 million from 214,000 tickets sold. The two December shows alone are enough to buoy BTS to No. 3 on the Top Tours chart.

Just behind BTS on Top Boxscores, another multilingual international crossover act grosses in the millions with two stadium concerts. Bad Bunny is No. 2 with $6.5 million and 70,000 tickets from shows on Dec. 10-11 at Hiram Bithorn Stadium in San Juan, Puerto Rico, just 25 miles from his hometown of Vega Baja. 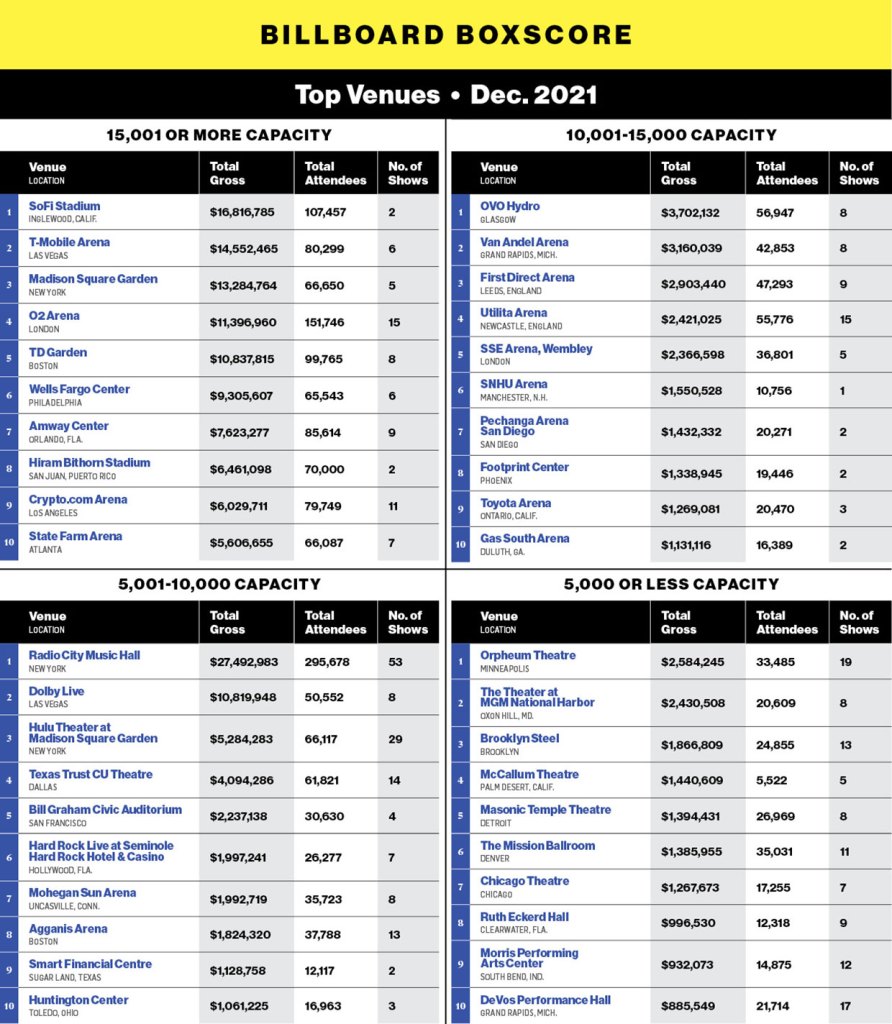 Not only does Bad Bunny have the power to bring tens of thousands of fans together for rare hometown performances, he also had another packed crowd down the road livestreaming the event at San Juan’s Coliseo de Puerto Rico. A viewing event of each night’s performance sold a combined 19,700, earning $645,000.

Further down the Top Tours and Top Boxscores rankings at No. 25 and 26, respectively, is a marathon residency by LCD Soundsystem. The band played 17 shows at Brooklyn Steel, earning $2.4 million from 32,500 tickets sold. The first four of those shows took place in November, leaving just under $1.9 million to count toward the December charts. Three final shows were planned for Dec. 19-21, but were canceled as Omicron picked up steam. LCD’s haul helps Brooklyn Steel claim the No. 3 spot on the month’s Top Venues (5,000 capacity or less) chart. 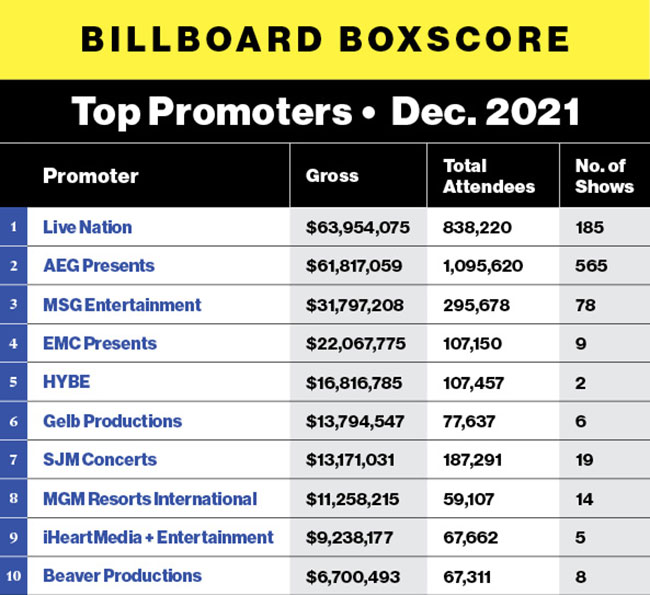 Noah Cyrus Opens Up About Her Music Journey | Billboard News

Noah Cyrus Opens Up About Her Music Journey |…